Lucas Fuel Treatment increases power and fuel mileage in both gasoline and diesel engines, fuel injected or carbureted. It’s a blend of oils with a high detergent action that allows the engine to operate at maximum efficiency. This fuel treatment is for vehicles requiring leaded fuel since it replaces the benefits of lead in gasoline, emission-free! Lucas Fuel Treatment is a fantastic aid in passing smog tests, and it cleans and lubricates the carburetor and injectors, causing fuel to burn more thoroughly for increased power and less fuel consumption. Its addition to your tank totally neutralizes the harmful effects of low sulfur diesel fuel. In compliance with federal low sulfur content requirements for use in diesel motor vehicles and non-road, locomotive and marine diesel equipment engines.

Our Family of Sites 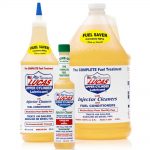